So, I know a lot of people have been curious about my new book (which isn’t officially out yet, but is on pre-sale!). Since it still doesn’t have a “look inside” feature, I figured I could put chapter summaries here, so that you could have more of an idea of what the book is actually about.

The introduction gives background about the book, about me and my reasons for writing. It also includes important background material for reading the book, such as the difference between liberal and radical, the relation I see between theory and activism, an explanation about trigger warning, and other things you should keep in mind while reading.

Chapter 1: What is bisexuality?

This chapter explores various meanings and definitions of bisexuality. First, I review some of the historical development of the term “bisexuality”, tracing its roots as well as changes in its meaning. In the second section, I try to define bisexuality on three axes: desire, community and politics. Under desire, I take up the definitions of “more than one”, and “similar and different”, and explore them in depth. Under community, I suggest and explore the idea of the bisexual umbrella, as well as the history of the U.S bi movement. Under politics (my favorite section!), I explore the radical political potential of bisexuality as derived from biphobic stereotypes (an elaboration on this post). The fourth section explains why the “bi is binary” allegation is bullshit :)

This chapter is about biphobia and monosexism as broad social structures. In the first section, I review and critique dominant views regarding biphobia in bisexual writings, and suggest a shift in attitude: While biphobia is usually viewed as a form of personal mistreatment, I argue that oppression of bisexuals is not anecdotal, but systemic. This is why I suggest using the term “monosexism”, which implies a broad system of oppression. In order to explain my argument and show how it works, I use three sources, which are the basic columns of this chapter. First, Kenji Yoshino’s theory of the epistemic contract of bisexual erasure. Second, Miguel Obradors-Campos’s theory of the nine faces of biphobia. Third, I use statistical data from the SFHRC Bisexual Invisibility Report as evidence. The final section deals with the ways in which monosexism affects monosexual people, which I do through two aspects: privilege and oppression.

This chapter explores the various implications of bisexual passing (being taken for a member of the dominant group). It begins with a review of the existing research and political writing about bisexuality and privilege, and suggests a shift in terms and attitude. Instead of talking about bisexuality and privilege, I suggest we start talking about bisexuality and passing. I then examine the concept of passing in depth from an historical and an epistemological perspective (i.e. accompanied cultural meanings of passing). I suggest that passing is bisexual is character, and that being bisexual is impossible without passing. I then use this these various meanings to think about how we fuck up hierarchies and systems of dominance (through feminist and women of color theories).

This chapter is about how feminism relates to bi women (including bi trans women), and how female bisexuality relates to feminism. The chapter opens with a brief introduction to feminism. It then divides up into two main sections: the first is about the subversive potential of female bisexuality against patriarchy, the second is about how sexual violence against bisexual women is generated and perpetuated. In the first part, I explore three ways in which female bisexuality can subvert patriarchy, those being: gender subversion (how female bisexuality can fuck up gender norms), bisexual choice (how the perception that bi women can choose whether or not to be with men is threatening to men and masculinity), and multiplicity (how female bisexuality – and bisexuality in general – is socially connoted with multiplicity, and how that subverts patriarchal values). In the second part, I try to explain the frighteningly high levels of sexual violence against bi women through representations in mainstream media and pornography. I then look into – and critique – bi movements’ response to these things, and suggest that instead of using “myth busting” and slut shaming (i.e. “we are not like that”), we should name sexual violence as sexual violence, and validate bi women’s right to be sexual (or not to be sexual) without fearing sexual violence or shaming.

This chapter is about how feminism relates to bi men (including bi trans men*), and how male bisexuality relates to feminism. It begins by describing male privilege, and continues by explaining how the ways in which men are hurt by the patriarchy are intimately related to those privileges. I then turn to male bisexuality in particular, and discuss the erasure and denial of it in popular culture. I do this by using my bifurious femininja superpowers to shatter Bailey’s Straight, Gay or Lying study into teeny bits of vomit, glass and rainbow. I do this by referring in particular to the pathologization, sexualization and denial of male bisexuality. Then there was a really smart bit about bi men of color, racism and AIDS, which I had to cut because the chapter was too long :( (I really hope it would get published in this upcoming book, though). I then take some time to review and critique how bi men have been talking and writing about their own invisibility. I suggest that instead of constantly comparing between bi male and female in/visibility (as they have), they should start talking about male bisexuality in particular, and in relation to their masculinity as a gender (a constantly missing piece). I then show how (pro)feminist bisexual men have actually done so, and use what they say to talk about how a (pro)feminist male bisexuality can help in smashing patriarchy. 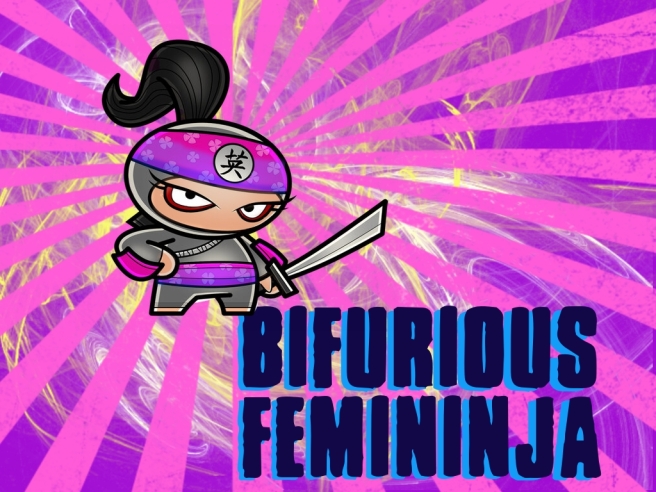 This chapter is about the connections and intersections between bisexuality and transgender*. Following from the previous chapter, this chapter starts by making a connection between feminism and transgender politics, and arguing that the two are beneficial for each other (without erasing feminist cissexism/transphobia). I then go on to explain the basics of transgender sex/gender theory using Asher Bauer’s blog post Not Your Mom’s Trans 101. Afterwards, I explore some connections between bisexuality and transgender, and suggest that the bi and trans movements share enormous potential for a strong alliance. I then explain exactly how and why this isn’t happening – focusing first on transphobia and cissexism in bisexual communities (an elaboration on this post), and then on biphobia in trans communities (remembering that two wrongs don’t make a right, making the point that both movements should start working on those problems). After this, I demonstrate how a bi-trans community can work, using the example of my local community in Israel/Occupied Palestine.

* Why, yes you can use “transgender” as a noun!

This chapter is about connections and intersections between bisexuality and racialized people. It begins with an explanation of the word “racialization” (as the process in which certain groups of people come to be understood as a “race”), and then focuses on one specific racialized identity: Mizrahi (i.e. Arabic Jews). This section starts with a review of the history and oppression of Mizrahis in Israel/Occupied Palestine, and then goes on to explore intersections and connections between bisexuality and Mizrahiness. After this, I take a while to introduce Israeli scholar Vicky Shiran’s theory about Mizrahi feminist identity, and suggest using the same ideas in building our bi identities. I then turn to the topic of bisexuality and whiteness, critiquing various bisexual movements (including my local community) for being white-centered and largely white-dominated. I close the chapter by making several suggestions on how bi communities can be more inclusive of people of color.

Chapter 8: Bisexuality and the GGGG movement

While the previous chapters explored bisexuality from internal or intersectional perspectives, this chapter takes a step back and looks at the mainstream bi movement from “outside” – at how it does activism, its reasons, and its goals. I start by introducing the term “bi assimilationism”, explaining the term as an attempt by bisexual movements to assimilate into the assimilationist gay community (otherwise known as the GGGG community – Gay, Gay, Gay and Gay). I go on by explaining what’s so wrong about the GGGG movement, and I do that by focusing on the fight for “equal marriage”, and DADT. I then proceed to demonstrate bi assimilationist notions using two recent bisexual campaigns. After this, I suggest a radical alternative for bi politics and activism, using understandings from all the chapters in the book.

View all posts by bidyke

2 thoughts on ““Bi: Notes for a Bisexual Revolution” book summary and excerpts”

Shiri Eisner is a bisexual, genderqueer, and feminist activist and writer. She is the author of the book “Bi: Notes for a Bisexual Revolution”. She holds a BA in interdisciplinary art studies, and will soon be returning to her MA in gender studies, writing about bisexuality on TV.